The “Holocene Era” is the geological epoch in which we currently live; it extends back to approximately 10,000 B.C. placing us currently in the year 12,012 H.E. Unlike any other period, it has seen intensive geological change through the emergence and then cultural/environmental development of the human race. David Spriggs’ sculptural installation of the same name (which translates roughly as “entirely recent”) portrays this epoch through a technical experiment in illusion, both architectural and ethereal.

Based out of Vancouver, Spriggs works primarily in phenomenological experience; he creates stunningly convincing illusions of airy, voluminous objects that we enter visually. This process relies upon the way we interpret vision, and exploits our Gestaltian susceptibility to illusion conflating disparate parts into an actualized whole. Holocene’s layering of warped rectangular forms presents a hyperbolic modernist reduction of the whole of human existence into one infinitely extended, anthropic abstraction. The novelty of this encounter allows for a pure abandonment to beauty, but, Spriggs’ installation strategy undermines the veracity of its own illusion by allowing the viewer access to the sides of his installation, where the individual sheets are identifiable and the depth created by the layering is pulled apart… (continued below) 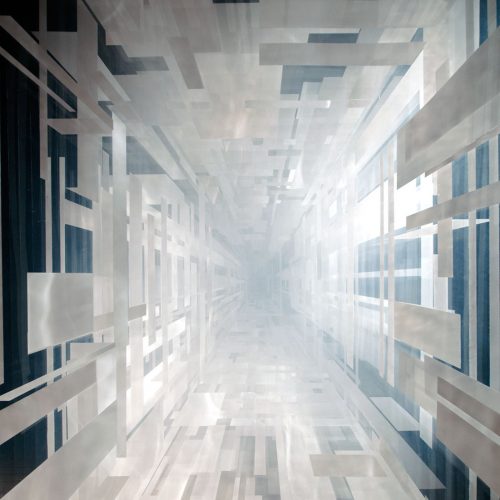 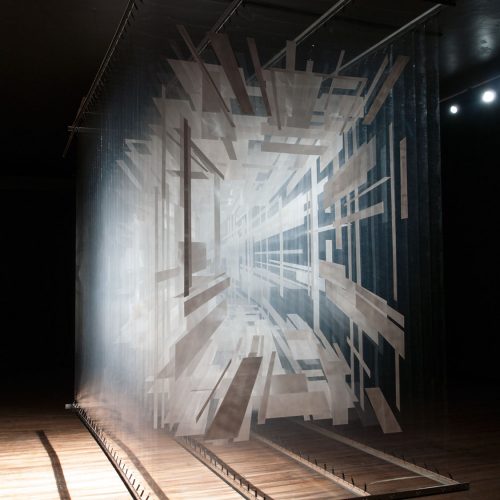 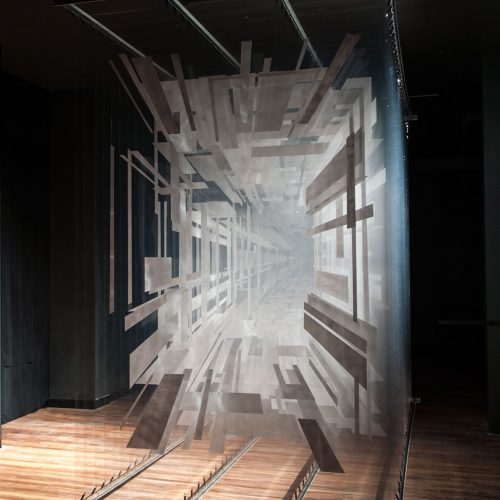 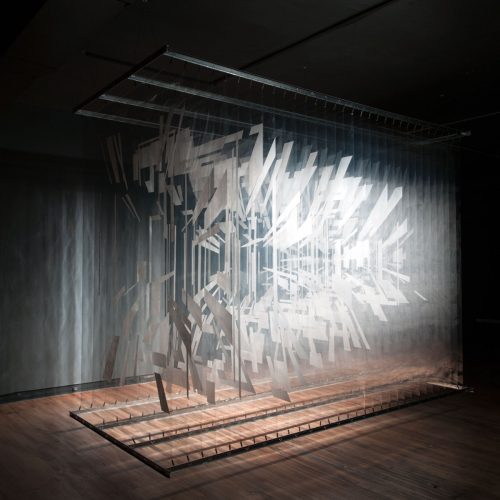 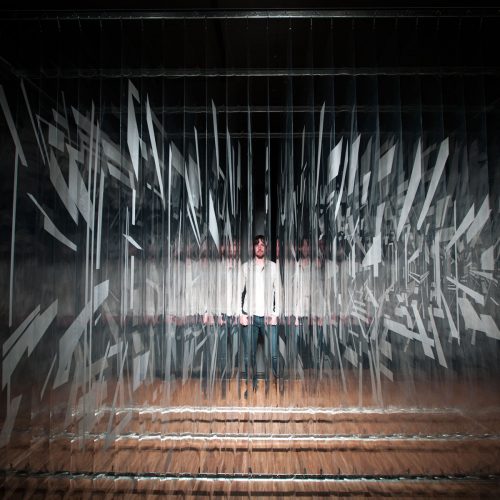 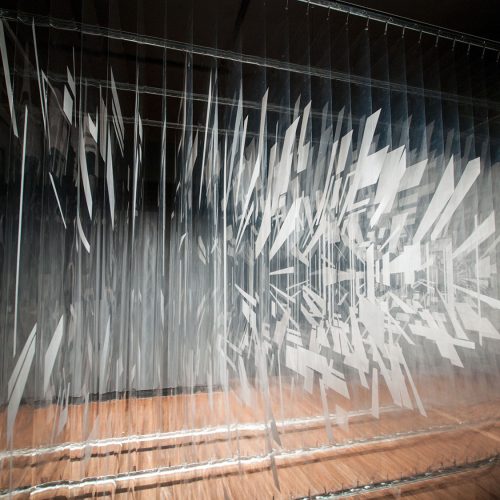 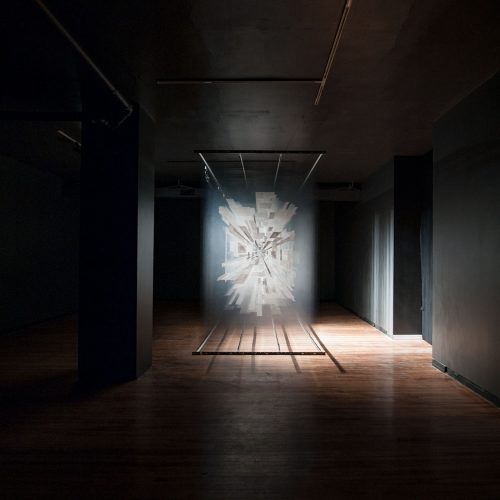 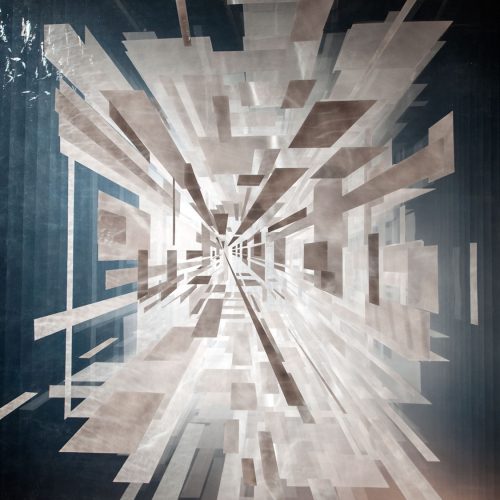 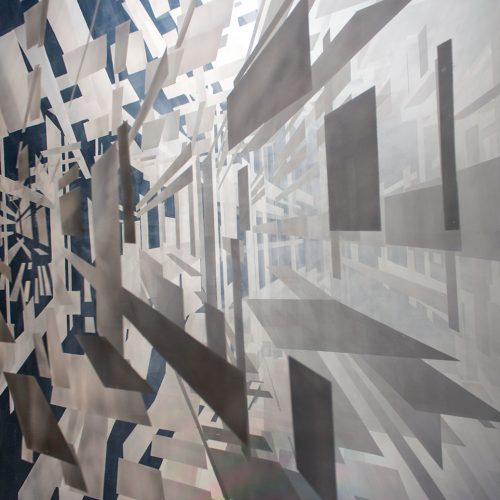 Spriggs’ virtual environments, like specters or holograms, create an illusion of physical presence without physicality. Instead, its physicality exists in the realm of the visual and in our mental processing of visual phenomena. His interest in virtual presence reflects the reality that contemporary experience is becoming increasingly mediated. More and more often the illusory is replacing the real; even concerts—one of the last vestiges of live performance—have been successfully performed by holograms such as The Gorillaz, Japanese virtual pop sensation Hatsune Miku, and the recent Tupac hologram at the Coachella music festival.

Spriggs’ work exploits the same susceptibility to illusion as these music promoters, but unlike in many modern three-dimensional illusions, his always reveal their mechanisms. Walking around his sculptures causes them to shift, warp and eventually break apart (visually) as the individual sheets become identifiable. Rather than blacking out the sides or restricting access to maximize the effectiveness of his illusions, Spriggs allows the viewer to deconstruct their perceptual encounter with the object. As the viewer moves, the infinite technological tunnel in Holocene pulls apart, reassembling in reverse as a sculptural form when the viewer circles around to the rear.

Spriggs revels in illusion while retaining a critical engagement with it. Holocene continues a long time interest in the generation—and subsequent deconstruction—of perceptual phenomena, this time directing his efforts towards an adaptation of linear perspective. The technique Spriggs uses—he calls it “strata-linear perspective”—expands classical, two-dimensional, linear perspective by spreading it across parallel planes to create physical as well as visual depth. The acrylic shapes on the layered mylar all point inward towards a single vanishing point. The depth is amplified by the illusion of volume created by his layered sheets, and the mise-en-abyme effect created by the reflection of the mylar, which expands one point linear perspective towards a true vanishing point: beyond the limits of sight.

One point linear perspective was systematized and popularized in the Renaissance by Filippo Brunelleschi and Donatello but it’s underlying principles originated from the theory of perspective introduced by medieval Muslim scholar, Alhazen, in his Book of Optics. While Alhazen’s insights into the mechanics of perception form the foundation of scientific observation (he has been heralded as the founder of both theoretical physics and the scientific method), they also resulted in techniques for manipulating vision, blurring the distinctions between the real and the virtual. Spriggs uses this contradictory marriage of two divergent paths of perspective—persisting illusion and scientific observation—as the subject for a portrait of human existence, and in so doing places the narrative of humanity in between self-delusion and self-awareness.

While Holocene offers an infinitely extended tunnel vision, its actual length is revealed from the side, allowing a reprieve from the illusion of relative perspective. Similarly, working from within a subjective perspective, the Holocene era (sometimes called the “Human era”) feels infinite, but we can rationally identify existence outside of its borders. This illusion of the persistence of humanity can plague any tautological system that rejects scientific knowledge, whether it is creationism or modern philosophy.

Post-Kantian modern philosophy, taken literally, is incapable of theorizing that which is anterior to human existence (any object that predates our species, extends past our extinction, or anything else which cannot be witnessed by a conscious subject). Modern philosophy assumes that knowledge and reality can only be experienced through observation, mediated through a thinking subject, and thus the Holocene era would be the only ‘real’ epoch because it is the only ‘witnessed’ epoch. Scientific knowledge on the other hand uses the same definition—that reality can only be experienced through observation—to come to the exact opposite conclusion: decentering the subject instead of solidifying its primacy.

Relying on repeatable experiment and observation of physical phenomena, scientific discourse opens up the debate of what could have existed prior to the emergence of humankind as well as what might survive us. The illusion within Holocene is a modern philosophical portrait of existence, while the deconstruction revealed from its sides is a scientific dissection/taxonomy of subjective, metaphysical ontology.

In the depths of Holocene its own image is reflected en abyme. But like a ship sailing off the edge of the world, it recedes, not into the infinite abyss, nor past the end of being; instead it extends into the foggy haze of the not-yet-known. Spriggs blends referents from empirical observation and persisting illusion to place us both within and outside of the environment he has created. Echoing modernist composition and the architecture of the space his work occupies, Spriggs maps the phenomenological encounter—decentering the truth of relative subjectivity while simultaneously presenting it in all its seductive aura.

1. Melliassoux, Quentin. After Finitude. New York: Continuum, 2010. Modern philosophy “is incapable of admitting what science tells us about these occurrences of matter independent of humanity… our correlationist [post-Kantian modern philosopher] then finds himself dangerously close to contemporary creationists.”
2. Ibid. Meilliassoux uses the existence of the fossil to illustrate the incompatibility between modern philosophy (correlationism) and science: “There is no possible compromise between the correlation and the arche-fossil: once one has acknowledged one, one has thereby disqualified the other.” However, accepting the existence of the fossil is not so simple. Because the ancient fossil predates consciousness, it can only be theorized by a completely new ontology that does not require a thinking subject to bring an object into being.
3. Ibid. Meillassoux calls the re-centering of the subject in modern philosophy “the misinterpretation of the Copernican revolution.”
4. I say “debate” here because scientific knowledge is so thoroughly revisionist. It must allow for new discoveries and evidence to override previously held truths, allowing history to be rewritten retroactively in an Owellian fashion. When a new reality presents itself, it replaces what once was “always there” and becomes the new “has always been,” and in this sense scientific knowledge, much like the forms in Holocene, casts its own image en abyme extending not chronologically, but from the thinking subject back towards the theorized event. Following the discovery that many dinosaurs were feathered, for example, the previous ‘reality’ of scaled or smooth ‘terrible lizards’ was displaced by the new truth of the fluffy and feathery beast. “Dinosaurs have never had feathers” becomes “these dinosaurs have always been feathered.” The key difference from modern philosophy is that this repositioning of truth is independent of subjective interpretation, even though it arises precisely from a subjective interpretation of fossilized ‘evidence.’